A History of Leadership 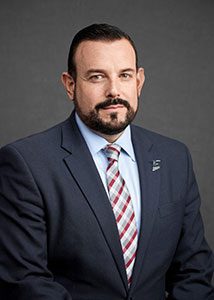 “The well-being and success of our students is the common bond that connects every area of campus. It is a gratifying result but getting there requires dedication and persistence by every member of the team,” said President David T. McFaddin. As a Kentucky native, first-generation student, and EKU graduate, he understands the importance of the student experience at Eastern. “This University placed me on a path that I could not imagine as an optimistic student from Paintsville, Kentucky.” As President, David is confident that he can continue and expand efforts to help others achieve their dreams. “I know it can happen, and I am positive the work we do campus-wide will produce great results for our current students.” 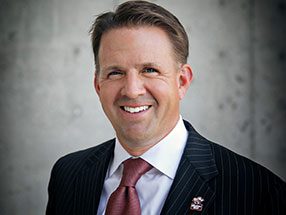 Described as EKU’s “next great, visionary leader,” Dr. Michael Benson maintained a distinguished record of success as an innovative executive who is well-recognized and respected among peers and colleagues. He has devoted himself to students and their academic success, is an accomplished communicator and scholar committed to diversity and expanding global academic opportunities, and is a proven financial manager who focused on developing and sustaining political and external support for EKU.

Born in Salt Lake City and raised in Texas, Dr. Benson brought to Eastern over 20 years of administrative experience in higher education, thirteen years of which have been spent as an institutional president.

Prior to his chief executive role at EKU, he was the 15th President of Southern Utah University, where he successfully directed the development, implementation, and successful completion of SUU’s largest and most ambitious comprehensive campaign, the “Future is Rising Campaign,” which secured over $103 million.

Dr. Benson resigned as president of EKU in January 2020. 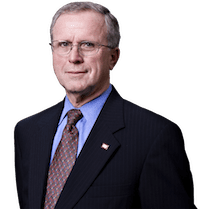 A first-generation college graduate of Eastern, Dr. Doug Whitlock was devoted to upholding the rich tradition of his Alma Mater while guiding her to greater excellence. He joined the EKU staff in 1968 and held progressively responsible administrative positions throughout his 45-year career, culminating in the presidency.

He initiated and oversaw capital, regional stewardship, student success and academic research projects that will long define Eastern’s future. These include Kentucky’s second largest performing arts center and the New Science Building, both of which opened in 2011; the innovative Noel Studio for Academic Creativity (housed in the John Grant Crabbe Main Library); and the Center for Renewable and Alternative Fuel Technologies.

During Dr. Whitlock’s tenure, Eastern Kentucky University garnered several national honors, including: designations by Forbes and U.S. News as being among America’s best colleges; distinctions as a community-engaged university by The Carnegie Foundation for the Advancement of Teaching and Washington (DC) Monthly magazine; and recognition for two consecutive years as one of America’s “Great Colleges to Work For,” including 2010’s designation as an Honor Roll institution, by the Chronicle of Higher Education. Most notably, perhaps, was EKU’s recognition as a veterans-friendly campus by G.I. Jobs magazine and a national No. 1 “Best for Vets” ranking two times in a three-year period from Military Times EDGE magazine. 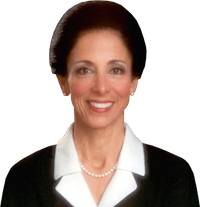 During her tenure, Eastern launched several new and distinctive academic programs, including one of the nation’s few PGA-accredited Professional Golf Management programs, as well as baccalaureate and graduate programs in Homeland Security.

Ms. Glasser’s presidency saw the University open its doors to several new facilities, including a new Business and Technology Center, a Student Services Building (now the Whitlock Building), a Fitness and Wellness Center and a new Corbin campus, and plans were initiated for a new Science Building and a new Manchester campus. 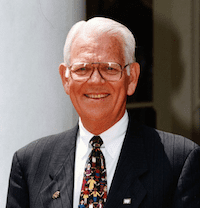 Dr. Eugene M. Hughes came out of retirement, after 42 years in higher education, to become Eastern’s interim president until a permanent president was found.

Hughes brought to Eastern not only a fresh face with new ideas, but also an impressive resume. Before retiring, he was president at Northern Arizona University and at Wichita State University, both of which faced the same kind of budget cutbacks that Eastern was facing. 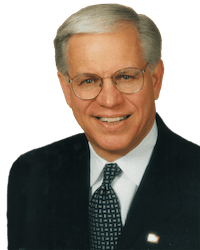 After an extensive national search, Dr. Robert Walter Kustra, Lieutenant Governor of Illinois, chair of the Illinois Board of Higher Education, and an adjunct professor of political science at Northwestern University, was selected as Eastern’s ninth president.

He instituted a series of major academic and administrative reforms. The previous nine colleges were merged into five: Arts and Sciences, Health Sciences, Business and Technology, Justice and Safety, and Education. Significant changes were proposed in the general education curriculum along with other academic reorganization activities.

Dr. Kustra made a strong commitment to improving the quality of student life. Among other initiatives, “First Weekend” was instituted in an effort to provide social and cultural programs to keep students on campus during weekends. 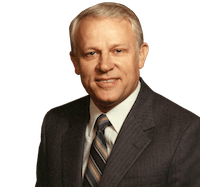 When Dr. Hanly Funderburk assumed the EKU presidency, he said the task at hand was to “make a good university a better one.” From his perspective as one coming from outside Kentucky, he quickly judged that Eastern was a much better institution than those close to her realized. He found a sound comprehensive regional university with an outstanding faculty, an appropriate array of academic programs ranging from traditional to contemporary, a student body whose members were serious about improving their lives through education, and a well-developed, beautiful physical plant.

Despite difficult budgetary circumstances that required fiscal restraint, the Funderburk presidency oversaw enrollment growth, new academic programs, and physical expansion of the campus. His tenure included construction of the Dizney and Funderburk buildings and the expansion of Crabbe Library. Several other projects were in the planning stages at the time of his retirement. Dr. Funderburk’s vision for outreach led to the establishment of regional campuses at Corbin, Danville, and Manchester, providing greater educational access for countless eastern Kentuckians. 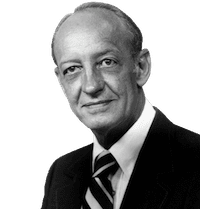 Dr. Julius Cherry Powell came to Eastern from Frankfort with his predecessor, Dr. Robert Martin. He served in a variety of positions at the University and was the Vice President for Administration at the time of Dr. Martin’s retirement. Dr. Powell often reminisced about his work with Martin. “Bob told me, come with me to Eastern and by the time the snow flies we will have it organized and running smoothly, and we’ll be able to relax.” Dr. Powell would then add, “And, for 16 years, the snow never flew.”

If Martin was the master builder, Dr. Powell was the polisher. His administration marked a consolidation of gains made during the preceding decades and one in which Eastern matured as a university.

Like his predecessor, Dr. Powell was a builder– but not necessarily of the brick-and-mortar variety. He was an engineer and constructor of organization and system, committed to making sure that Eastern’s quality kept pace with its quantity. His monuments at Eastern are its student code, its organizational structure, its systematic approaches to administrative and academic computing, and its framework for strategic planning and budgeting, including the first articulation of institutional goals aimed at mission achievement. 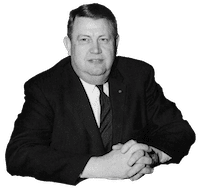 After his selection as president in 1960, Dr. Robert Martin first focused his attention on a building program at Eastern Kentucky, especially on the need for residence halls to house an anticipated increase in the number of students. Eastern put its building program in high gear during 1960-61. In all, 12 residence halls, classroom facilities, physical education and athletic structures, a new student center, an experimental farm, several natural areas and recreational facilities, and other administrative and academic buildings came into existence. Social fraternities and sororities also were added in the 1960s, and in 1963 the Kentucky Colonel became Eastern’s official mascot.

Dr. Martin was the first Eastern graduate to serve his alma mater as president. He retired in 1976 as president emeritus. 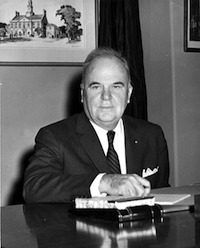 After World War II, the return of the veterans brought stability and an increase in enrollment. As the war ended, enrollment climbed from 270 in 1943 to 453 in September 1945, and to 767 in March 1946. Eastern had made arrangements for assembling war-surplus, prefabricated housing for veterans, and “Veterans Village” became fixed as a campus landmark and served as Eastern’s facility for married students until replaced by Brockton in the 1960s.

At that time, the legislature granted Eastern authority to offer non-teaching degrees. Dr. O’Donnell successfully implemented integration of the campus, and in the summer of 1956, Andrew Miller of Richmond became the first African American student to enroll. 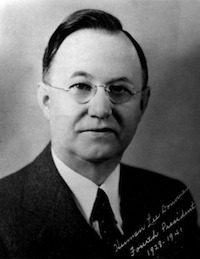 Dr. Herman Lee Donovan, a nationally prominent educational leader, assumed the leadership of Eastern Kentucky in 1928. Under Dr. Donovan’s direction, Eastern achieved regional accreditation for the first time, abolished the normal school, established academic ranks, created a division of graduate study in 1935 with the right to grant a master’s degree in teaching, reorganized most academic departments, and expanded programs.

By 1940 the Fitzpatrick Arts Building; Miller, Beckham, and McCreary Halls; and the Keen Johnson Student Union had been constructed, in part with federal funding.

Brock Auditorium became the cultural center of campus and was, for more than three decades, the site of commencement exercises. The Weaver Health Building gave Eastern a large and modern athletic-academic facility that, as home of “Maroon” basketball teams, would see Eastern win 225 and lose only 51 games in 31 seasons before it gave way to the larger Alumni Coliseum. The Keen Johnson Building soon became the social center of the campus and gave Eastern its most noted landmark, the clock tower.

Dr. Donovan left Eastern in 1941 to assume the presidency of the University of Kentucky. 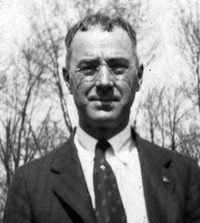 It was largely through Dr. Cooper’s efforts as dean that Eastern was admitted to membership in the Southern Association of Colleges and Secondary Schools. 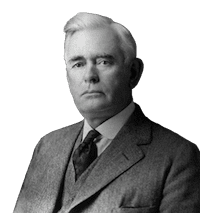 Dr. Thomas Jackson Coates was a native Kentuckian and came to Eastern from the State Department of Education, where he had been serving as the supervisor of rural schools. He had also served as superintendent of Richmond city schools from 1907 to 1911.

It was during his tenure that the first significant change in Eastern’s status occurred. In 1922, Eastern became a four-year institution, known as Eastern Kentucky State Normal School and Teachers College, and began to offer its first baccalaureate degrees.

The school experienced a small building boom during his tenure. Eastern acquired the 176-acre Stateland Farm and spent more than $250,000 on new construction, including the Coates Administration Building, the Cammack Building, Burnam Hall, and the original John Grant Crabbe Library. 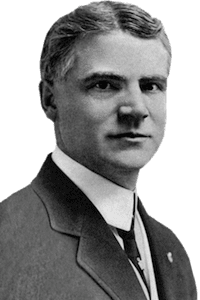 Dr. John Grant Crabbe, Kentucky superintendent of public instruction, assumed the Eastern presidency in 1910 and spent a good part of his time perfecting the organization of the still young institution. Dr. Crabbe had two real loves: the library and the physical plant. Today’s modern EKU library bears his name in honor of that commitment, and he is credited for nearly doubling appropriations for maintenance of the campus.

Maroon and white were selected as the school colors. Intercollegiate athletic competition for men and women began shortly after Eastern opened in 1907. 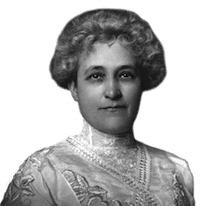 Mrs. Roark signed the diplomas for the first graduating class in 1909.

Upon retiring as acting president on April 9, 1910, she continued in the position as dean of women until the close of the 1914-15 school year. 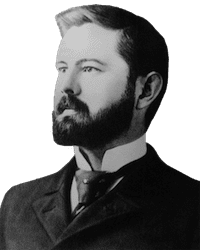 On May 9, 1906, the Board of Regents selected Dr. Ruric Nevel Roark, former director of the normal department at the University of Kentucky, to be Eastern’s first president. Roark had a national reputation as an expert on public school management.

During Dr. Roark’s tenure, he expanded a physical plant that originally consisted of an athletic grandstand and three Central University buildings: the University Building, the Miller Gymnasium, and Memorial Hall. By 1911 the home economics house, a home for the superintendent of buildings and grounds, Roark Hall, Sullivan Hall, and a power plant had been completed — all at the staggering cost of $164,481.64.