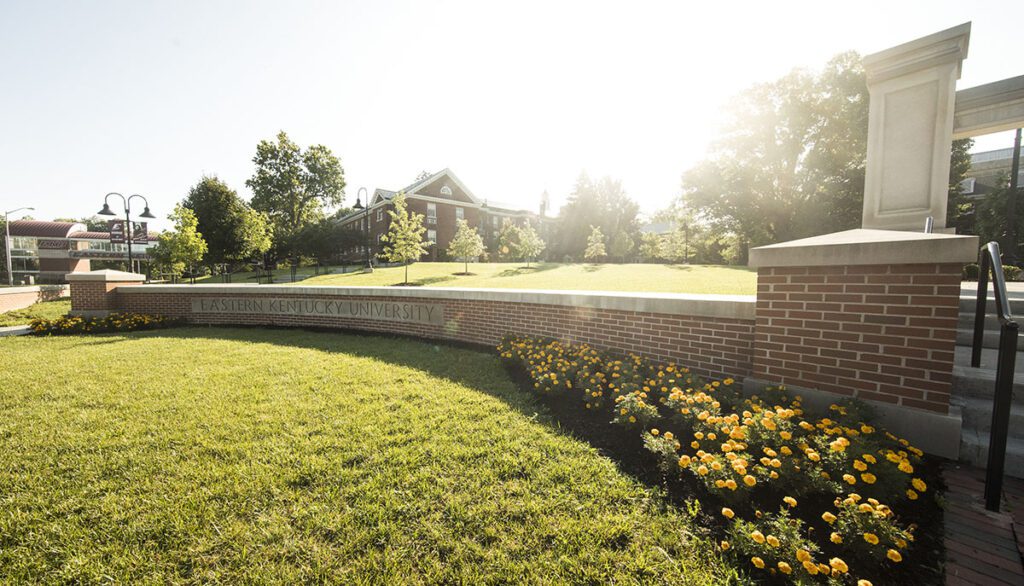 Eastern Kentucky University is a regional, coeducational, public institution of higher education offering general and liberal arts programs, pre-professional and professional training in education and various other fields at both the undergraduate and graduate levels. Located in Richmond, Madison County, Kentucky, Eastern has a distinguished record of more than a century of educational service to the Commonwealth.

Situated near the heart of the Bluegrass, Richmond is served by a network of major highways that make Eastern easily accessible from all parts of Kentucky and surrounding states. Richmond is 26 miles southeast of Lexington, Kentucky. Interstate Highways I-75 (north-south) and I-64 (east-west) make the metropolitan areas of Cincinnati, 112 miles to the north, and Louisville, 110 miles to the west, within convenient distance by automobile. Richmond is also served by U.S. Route 25 from Southeastern Kentucky and Kentucky Route 52 from the east and west. The Bluegrass, Mountain, Daniel Boone, and Cumberland Parkways provide even greater accessibility by automobile since the city is located near the convergence of these arterial highways into the interstate system.

Richmond, the county seat of Madison County, is one of the Commonwealth’s fastest-growing cities, with about 33,000 residents. The community provides an excellent environment for the university student and boasts a regional shopping mall, theaters, live entertainment, fine dining, cultural events and activities, as well as many areas of historic and scenic interest. Fort Boonesborough State Park, birthplace of Kentucky, is located 12 miles to the north. Many other historical sites are within easy driving distance. Scenic and recreational areas surround this section of the state.

The Kentucky General Assembly of 1906 enacted legislation establishing the Eastern Kentucky State Normal School. Governor J.C. Beckham signed the bill into law on March 21, 1906. On May 7 of that year, the Normal School Commission, meeting in Louisville, selected the campus of the old Central University, founded in 1874 in Richmond, as the site of the new school. On June 2, 1906, Ruric Nevel Roark was chosen President of the Normal School and the training of teachers was begun.

In 1922, Eastern became a four-year institution known as the Eastern Kentucky State Normal School and Teachers College. The first degrees were awarded by this institution in 1925. In 1928, the College was accredited by the Southern Association of Colleges and Secondary Schools. In 1930, the General Assembly renamed the school the Eastern Kentucky State Teachers College.

In 1935, a graduate program was approved at Eastern, leading to the Master of Arts degree in Education. In 1948, the General Assembly removed the word “Teachers” from the name of the college and granted the college the right to award nonprofessional degrees.

The most significant day since its founding came for Eastern on February 26, 1966, when Governor Edward T. Breathitt signed into law a bill renaming the institution Eastern Kentucky University and sanctioning the awarding of graduate degrees in academic fields other than education.

During this period of time, Eastern Kentucky University has increased rapidly in size and stature. Beginning with a few students engaged in short review and certificate courses, the University today serves thousands of Kentuckians. The curriculum leads to associate degrees, baccalaureate degrees, and an expanding graduate program that currently offers degrees at the master’s level in many other fields as well as the already well-established Master of Arts degree in Education and the various fifth- and sixth-year leadership programs in education, psychology, and technology. In addition to these programs, Eastern offers joint doctoral programs with cooperating institutions.

Ever-mindful of the purpose of its founding, Eastern continues to recognize its historic function of preparing quality teachers for the elementary and secondary schools of the Commonwealth. However, a strong liberal arts curriculum leading to appropriate degrees, together with pre-professional courses in several areas and graduate programs, enable Eastern to serve the Commonwealth as a regional university.

Within its statutory responsibilities, Eastern Kentucky University seeks to provide intellectual and cultural opportunities that will develop habits of scholarship and intellectual curiosity, provide a deep understanding of American democracy and the citizen’s role in maintaining its strength and vitality, impart an understanding of humans and their aspirations, enable effective and efficient communication, and prepare productive and responsible citizens. The University will remain responsive and flexible in order to serve in unique and needed ways.

Within these general responsibilities and purposes, the University is dedicated to three specific functions — high-quality instruction, scholarship, and service, and places emphasis on the three in that order. Through its colleges and schools, the University seeks to offer quality instruction at a variety of degree levels in general education, the arts, the sciences, business, education, pre-professional and professional areas, and applied and technical disciplines. Through consultative services, continuing education, and the extended campus, the University seeks to provide service to the community and the region. Research seeks both to advance knowledge in the subject matter areas with which the University is concerned and to support the primary function of teaching.


Learn about the plans, places and policies that make EKU great!

EKU in the Media