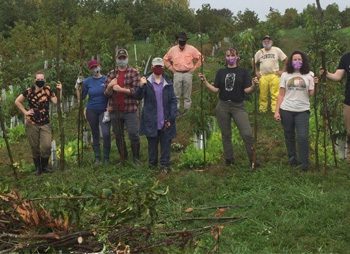 Eastern Kentucky University professor and ecologist Dr. Jennifer Koslow has been heavily involved with the expansion of knowledge and awareness concerning the American chestnut tree.

In the early 20th century, the rapidly-growing American chestnut was heavily prevalent with nearly four billion trees in the eastern United States. The quality wood was used in various pieces of furniture, fencing and building. The nuts fed wildlife, livestock and people all the same.

“They used to be these huge towering trees but now they’re basically little shrubs,” Koslow said. “When they get the disease, everything above where the disease is will die but then the tree sprouts back from the roots, creating these little chestnut shrubs.”

The Chinese chestnut tree has the ability to get the blight and be unaffected, continuing to grow, whereas the American chestnut will be girdled, meaning anything more remote from the roots than the infection site will eventually die.

The American Chestnut Foundation is a nonprofit organization dedicated to bringing back the American chestnut. Koslow serves as vice president of the foundation’s Kentucky chapter.

“For the most part my work so far hasn’t been on the research side, but on outreach, teaching and service,” she said.

In the summer of 2021, Koslow mentored an undergraduate research project looking at the effects of fire on American chestnut growth at Bad Branch State Nature Preserve and Hi Lewis Pine Barrens State Nature Preserve, both located on Pine Mountain in far eastern Kentucky. Koslow mentored Liah Continentino, a student from New College of Florida, was funded through a National Science Foundation Research Experiences for Undergraduates (REU) program that focuses on disturbance ecology in central Appalachia.

REU programs bring talented undergraduates with limited research opportunities to other universities, in this case EKU, to gain experience in the process of scientific research. The program directors are Dr. David Brown of Biological Sciences and Dr. Kelly Watson in both Geosciences and the Division of Natural Areas.