Not Finished Yet: Chemistry Professor Celebrates 50 Years at EKU 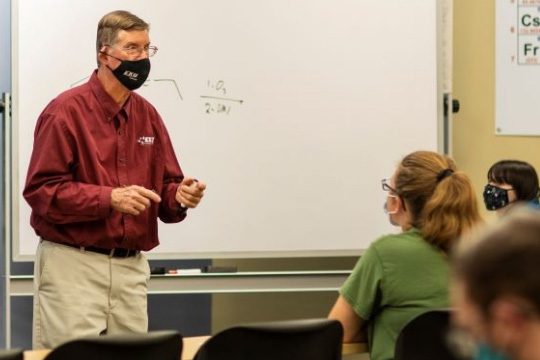 In a world where the average worker changes jobs 12 times throughout their lifetime, it is remarkable that someone has served in the same profession and at the same institution for 50 years. Eastern Kentucky University chemistry professor Dr. Vernon Stubblefield is that unique character.

A love for students and the topic he teaches — organic chemistry — has kept him in front of the classroom all these years.

“I just love it so much,” Stubblefield said. “We have good faculty. I love the department.”

Even though most of the colleagues he has worked with over the years have since retired and stopped coming to campus, Stubblefield doesn’t let retirement stop him. You see, he actually retired as Professor Emeritus in 2003. A ceremony was held. Remarks were made. The department at that time asked him to teach just two classes for the next three years. Those years went by and they asked him to continue. Rinse and repeat every year until 2021, when he reached the 50-year milestone.

“I think I have another year left in me,” he laughs. “I’m still debating.”

A sparkle flickers in his eyes when speaking about former students he’s encountered since they graduated. Even if it’s during a stressful situation.

“In 2010 I broke my leg,” Stubblefield recalls. “It was pretty bad so I had to go to Lexington to have surgery. I’m lying on the x-ray table and I hear a voice: ‘Dr. Stubblefield? I had you in class.’ and three more people during my stay in the hospital said they had me in class. One young lady told me, ‘We’ll take good care of you.’ And they did.”

“The students are my legacy,” he said. “It’s interesting to see where they go and how they live their lives. It makes you feel good to see them be successful. I hope in some small way, I’ve been a positive influence on them.”

Vernon Shaw Stubblefield was born in 1942 to the Murray, Ky., druggist, also named Vernon, and his wife Charlotte. He remembers a traditional childhood, complete with church every Sunday, riding bicycles until the streetlights came on, and listening to Stan Musial and the St. Louis Cardinals on KMOX radio. After graduating from Murray High School, he attended Murray State University, where he majored in chemistry and mathematics, pitched for the baseball team and served with the Army ROTC.

Stubblefield married his high school sweetheart, Sharon, during their years at MSU, and the couple moved to Lexington upon graduation so he could complete his Ph.D. at the University of Kentucky.

In 1969, done with course work but not quite finished with his dissertation, Stubblefield was called to Fort Gordon, Georgia, where he would begin serving his time with the Army.

“I had 30 days to report,” he said. “So I spent every waking minute finishing my dissertation. I went to Lexington to defend on Wednesday and hopped on a plane Saturday headed for my time in the Army.”

Stubblefield ran all the communications for the 1st Battalion, 6th U.S. Infantry, which served a year in Vietnam. As he neared the end of his tour of duty in the summer of 1971, he began writing letters to friends back home, hoping for a lead on a job. Those letters led him to EKU.

The university was in the beginning stages of forming a forensic science program and the dean of the School of Law Enforcement asked Stubblefield if he would help develop the curriculum for a program.

Stubblefield and colleague Dr. Bob Fraas spent a few years developing the forensic science program, even though the topic wasn’t the specialty of either professor.

“We learned how to do it,” Stubblefield said. “We had to go find the books and we studied. We went to the state lab in Frankfort often and learned a lot there.”

Much has changed over the 50 years since Stubblefield arrived in Richmond.

“It’s very different,” he admits. “We had no computers back then. Now, everything is at our fingertips. The campus construction. It’s so much bigger. And the curriculum. So much for students to choose from.”

While he said he enjoys the amenities of the new science building and all the positive changes that he’s experienced over the years, he said the one constant that he hopes does not change is the atmosphere at EKU.

Outside of the classroom, Stubblefield enjoys family, friends, volunteering and golf. He and Sharon raised their three children in Richmond, two of them graduating from Eastern. They enjoy spending time with their two teenage grandchildren. He serves Rosedale Baptist Church as trustee, deacon, treasurer and Sunday School teacher. He delivers meals to shut-ins. He plays golf as much as can, holding 14 member championships at the University Club at Arlington.

As full as his life outside of the classroom is, Stubblefield still feels a pull toward the students and the topic he’s taught for more than half a century.

“I find that you don’t need to retire from something, that it’s best to retire to something,” he said. “I’ve had a good life. Fifty would be a good number to finish on. But this is my calling.”